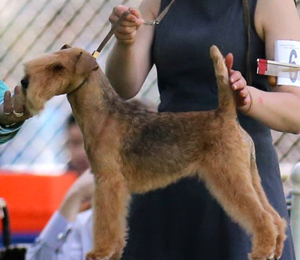 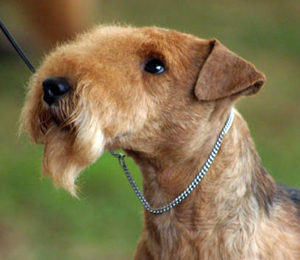 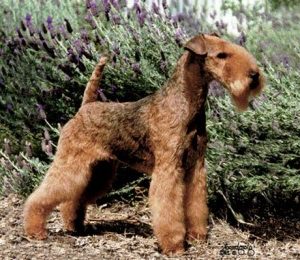 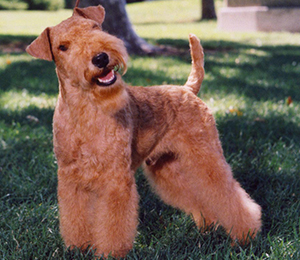 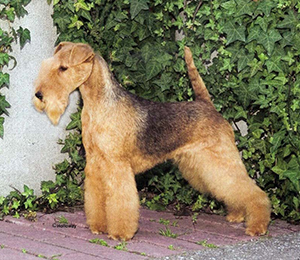 The Lakeland Terrier was bred to hunt vermin in the rugged shale mountains of the Lake District of northern England. He is a small, workmanlike dog of square, sturdy build. His body is deep and relatively narrow, which allows him to squeeze into rocky dens. He has sufficient length of leg under him to cover rough ground easily. His neck is long, leading smoothly into high withers and a short topline ending in a high tail set. His attitude is gay, friendly, and self-confident, but not overly aggressive. He is alert and ready to go. His movement is lithe and graceful, with a straight-ahead, free stride of good length. His head is rectangular, jaws are powerful, and ears are V-shaped. A dense, wiry coat is finished off with longer furnishings on muzzle and legs.

The ideal height of the mature dog is 14½ inches from the withers to the ground, with up to a one-half inch deviation either way permissible. Bitches may measure as much as one inch less than dogs. The weight of the well balanced, mature male in hard show condition averages approximately 17 pounds. Dogs of other heights will be proportionately more or less. The dog is squarely built, and bitches may be slightly longer than dogs. Balance and proportion are of primary importance. Short-legged, heavy-bodied dogs or overly refined, racy specimens are atypical and should be penalized. The dog should have sufficient bone and substance, so as to appear sturdy and workmanlike without any suggestion of coarseness.

The expression depends on the dogs mood of the moment; although typically alert, it may be intense and determined, or gay and even impish. The eyes, moderately small and somewhat oval in outline, are set squarely in the skull, fairly wide apart. In liver or liver and tan dogs, the eyes are dark hazel to warm brown and eye rims are brown. In all other colors, the eyes are warm brown to black and eye rims are dark. The ears are small, V-shaped, their fold just above the top of the skull, the inner edge close to the side of the head, and the flap pointed toward the outside corner of the eye.

The skull is flat on top and moderately broad, the cheeks flat and smooth as possible. The stop is barely perceptible. The muzzle is strong with straight nose bridge and good fill-in beneath the eyes. The head is well balanced, rectangular, the length of skull equaling the length of the muzzle when measured from occiput to stop, and from stop to nose tip. The proportions of the head are critical to correct type. An overlong foreface or short, wedge shaped head are atypical and should be penalized. The nose is black. A “winter” nose with faded pigment is permitted, but not desired. Liver colored noses and lips are permissible on liver coated dogs only. A pink or distinctly spotted nose is very undesirable. The lips are dark. Jaws are powerful. The teeth, which are comparatively large, may meet in either a level, edge to edge bite, or a slightly overlapping scissors bite. Specimens with teeth overshot or undershot are to be disqualified.

The neck is long; refined but strong; clean at the throat; slightly arched, and widening gradually and smoothly into the shoulders. The withers, that point at the back of the neck where neck and body meet, are noticeably higher than the level of the back. The topline, measured from the withers to the tail, is short and level. The body is strong and supple. The moderately narrow oval chest is deep, extending to the elbows. The ribs are well sprung and moderately rounded off the vertebrae. The Lakeland Terrier is a breed of moderation. A barrel-chested, big-bodied dog or one which is slab-sided and lacking substance is atypical and should be penalized. The loins are taut and short, although they may be slightly longer in bitches. There is moderate tuck-up. The tail is set high on the back. It is customarily docked so that when the dog is set up in show position, the tip of the tail is level with the occiput. In carriage, it is upright and a slight curve toward the head is desirable. Behind the tail is a well-defined, broad pelvic shelf. It is more developed in dogs than in bitches. The tail tightly curled over the back is a fault.

The shoulders are well angulated. An imaginary line drawn from the top of the shoulder blade should pass through the elbow. The shoulder blade is long in proportion to the upper arm, which allows for reasonable angulation while maintaining the more upright “terrier front.” The musculature of the shoulders is flat and smooth. The elbows are held close to the body, standing or moving. The forelegs are strong, clean and straight when viewed from the front or side. There is no appreciable bend at the pasterns. The feet are round and point forward, the toes compact and strong. The pads are thick and black or dark gray, except in liver colored dogs where they are brown. The nails are strong and may be black or self-colored. Dewclaws are removed.

The thighs are powerful and well muscled. The hind legs are well angulated, but not so much as to affect the balance between front and rear, which allows for smooth efficient movement. The stifles turn neither in nor out. The distance from the hock to the ground is relatively short and the line from the hock to toes is straight when viewed from the side. From the rear the hocks are parallel to each other. Feet same as front. Dewclaws, if any, are removed.

Two-ply or double, the outer coat is hard and wiry in texture, the undercoat is close to the skin and soft and should never overpower the wiry outer coat. The Lakeland is hand stripped to show his outline. (Clipping is inappropriate for the show ring.) The appearance should be neat and workmanlike. The coat on the skull, ears, forechest, shoulders and behind the tail is trimmed short and smooth. The coat on the body is longer (about one-half to one inch) and may be slightly wavy or straight. The furnishings on the legs and foreface are plentiful as opposed to profuse and should be tidy. They are crisp in texture. The legs should appear cylindrical. The face is traditionally trimmed, with the hair left longer over the eyes to give the head a rectangular appearance from all angles, with the eyes covered from above. From the front, the eyes are quite apparent, giving the Lakeland his own unique mischievous expression.

The Lakeland Terrier comes in a variety of colors, all of which are equally acceptable. Solid colors include blue, black, liver, red, and wheaten. In saddle marked dogs, the saddle covers the back of the neck, back, sides and up the tail. A saddle may be blue, black, liver, or varying shades of grizzle. The remainder of the dog (head, throat, shoulders, and legs) is a wheaten or golden tan. Grizzle is a blend of red or wheaten intermixed in varying proportions with black, blue or liver.

Movement is straightforward and free, with good reach in front and drive behind. It should be smooth, efficient and ground-covering. Coming and going, the legs should be straight with feet turning neither in nor out; elbows close to the sides in front and hocks straight behind. As the dog moves faster he will tend to converge toward his center of gravity. This should not be confused with close movement.

The typical Lakeland Terrier is bold, gay and friendly, with a confident, cock-of-the-walk attitude. Shyness, especially shy-sharpness, in the mature specimen is to be heavily penalized. Conversely, the overly aggressive, argumentative dog is not typical and should be strongly discouraged.