The intent of this column is to disseminate information that may be of use to breeders of Lakelands. My number one piece of advice to readers is: Don’t believe a 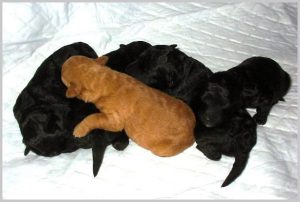 Use the information shared to start your own search for truth. Always remember that science cannot prove anything. Properly conducted scientific investigations either increase or decrease the likelihood that an explanation is the correct one. Often explanations that have been accepted for many years turn out to have no basis in fact.

The researchers who discovered the microbe that is the causative agent of peptic ulcers were awarded the Nobel Prize this year, finally. When the work was first presented at a medical conference, it was totally rejected. Even though published, the evidence about the causative agent was ignored for years. I used to give out copies of the journal articles to people with ulcers to give to their doctors (who ignored the information and kept on giving the same treatment). I suspect there are many problems in dogs that are complacently accepted as having a particular cause when the reality is something quite different. I bring this up because if you have a burning desire to breed superior representative of your chosen breed, you will at times find yourself frustrated with a lack of information about health problems and defects, or conflicting information, or sweeping generalities that just don’t fit the facts.

I’m going to discuss some anomalies I have seen in Lakelands over the 30+ years that I have been breeding this breed. It would help us all if you members would give some input about any of these or other conditions you have encountered. Genetics plays a role in a number of these anomalies, but the older I get the more I see that Nature vs. Nurture is not an either / or proposition but a continuum, with a few traits almost totally under genetic control, and some under environmental control, with the vast majority due to a complex interaction between genetic make-up and environmental influences. Our gene pool is small; we can not afford to discard and lose diversity, and just as surely we can’t afford to retain and spread undesirable genotypes. It is unconscionable that our parent club has never conducted a health survey. A good first step is to gather information to determine what questions should be included in a health survey so that when we do it the results will be meaningful.

Some years back I composed a list of defects / disorders reported in Lakelands for the website. I won’t go back and list all of those but will start with some that have either been reported to me or that I have personally observed that are not included on that list.

If you would like to email me I will be happy to report your information without names or specifics if you wish. Or you may prefer to send a letter to the editor.