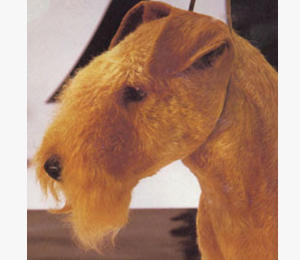 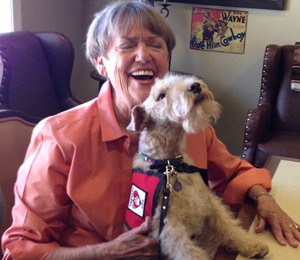 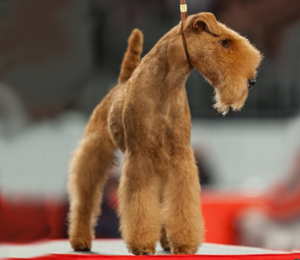 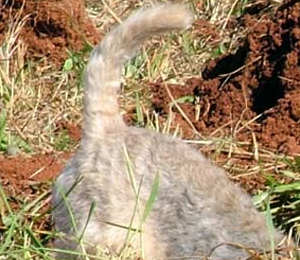 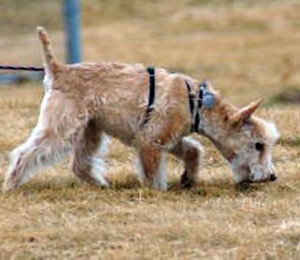 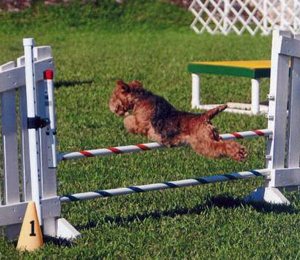 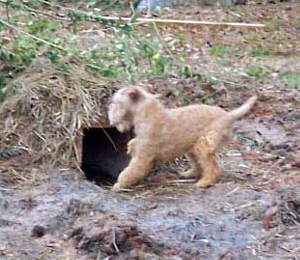 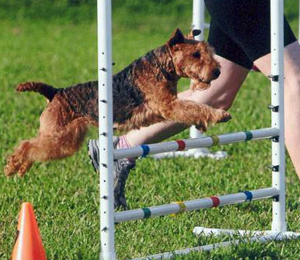 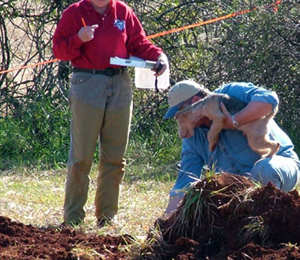 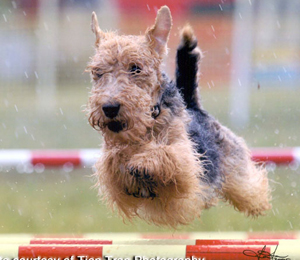 Lakelands were bred to do their work independent of human direction. It is a measure of the success of past breeders that the USLTC’s website can describe the breed as “a true challenge to obedience train.” I prefer to consider the terrier’s independence as a highly developed form of work ethic, which—coupled with the terrier’s famous tenacity—can produce dogs of formidable focus and attention. In order to develop such focus and attention, however, you have to do your groundwork. The true training challenge is to incorporate the appropriate training philosophies into your daily interaction with your dog.

The initial hurdle is the highly developed independence of the Lakeland. How do you create a partnership with your dog? Creating a partnership is quite easy to do by controlling the dog’s environment. The dog’s owner can and must control and direct the dog’s access to a huge variety of potentially rewarding activities, access to special food being only one reward. One of the best routes to focus and attention is use of the Premack Principle. In 1965 David Premack described a principle of operant conditioning whereby a behavior that occurs reliably can be used as a reinforcer for behaviors that occur less reliably. For example, I control my dogs’ access to the backyard. Before I open the door I ask for and get a sit, then I open the door and release my dogs into the yard. The behavior of running off into the yard reinforces the sit. Soon the dogs anticipate by running to the door and sitting. I require the same behavior prior to opening a crate door. The behavior you choose does not have to be a sit. You could choose a down or even something as simple as having the dog give eye contact. The point is that the dog acknowledges the role you play in controlling the environment!

People are generally unaware of how frequently they use the Premack Principle in training very young puppies. For example, how often to you pick up a young pup that is jumping up against the side of the pen? It doesn’t take very many repetitions before all the pups learn that the way to get attention and be picked up is to jump and whine. I tried to do the opposite with my last litter. I ignored all the pups jumping up and picked up and cuddled the one pup that was sitting looking at me. The whole litter quickly learned that the way to get me to let them out to play was to sit and look at me. It was truly amazing to see a litter of five pups all trying to sit on one another.

People don’t spend very much time thinking about how they play with their dogs. Owners are amazed by their dog’s abilities to chase and retrieve tennis balls. However, where are you, the owner, in this game? You are sending your dog away from you for a reinforcing object—the dog gets to run and play with the reinforcing object, then sometimes will return the ball to you for another throw. You become the equivalent of a ball-throwing machine, and will even, heaven forbid, go and pick up the ball in order to throw it. I sometimes wonder who is playing with whom? This type of play reinforces terrier independence and does nothing to make you an active participant in the fun. If your Lakeland finds playing ball rewarding, then use that game as a reward for performing some other behavior. I use the ball to reinforce distance or directional commands. For example, to increase my dog’s speed on the recall I will call the dog to me and throw the ball between my legs. This helps teach the dog to drive in towards me. I will start the game by picking up a ball and inviting the dog to do something that I can reward with a throw. The game will only continue if the dog brings back the ball and puts it at my feet or in my hand if I am sitting down. I always stop games before my dog has had enough play.

Playing a game of tug is a great way to build teamwork. Rules are simple: you initiate the game and you end the game. I like to have two or more identical tug toys. I also like to have the dog on leash so I do not have to bend or loom over the dog. I restrain the dog slightly and make the toy dance on the ground a short way from and in Sunny (click on photo for larger view)front of the dog. Release the dog to the toy, saying something like “get it,” and praise the dog for picking up the toy and playing. Sometimes you can let the dog “win” and run off with the toy, then you can make the second toy “live.” Most dogs will run back to the new toy and start to tug, allowing you to pick up the old one. People express concern that they cannot get the toy away from the dog to end the game. If you slip one hand into the dog’s collar, hold the collar against your leg, and hold the toy with the other hand (don't pull it!) then the dog will let go because “this” game isn’t any fun. At first I will use this technique to stop the tugging, then as soon as I have the toy I offer it again to the dog with the “get it” command. Keep your sessions very short in the beginning, always stopping before the dog has had enough.

Tug toys make great targets for training all kinds of distance behaviors. You can throw the tug over a jump, then send the dog over the jump to the toy. One the dog has grabbed the toy you can run over to play tug, or call the dog back over the jump and play tug with the second toy. The possibilities are endless. If you are able to initiate a game of tug at will, then you will always be able to engage your dog in play and keep it occupied, hence avoiding unpleasant or inappropriate dog interactions.

Individuals who show in conformation are very reluctant to play tug with their dog believing that it fosters aggression and can ruin dentition—both myths. Playing a good game of tug with your terrier can help you both relieve stress and so be better able to focus. You will get used to asking for and taking things from your dog’s mouth. If you are in control of the game and determine when it starts and when it ends, then aggression should not be an issue. As far as bites are concerned, dogs grab rope or fleece tuggies with their whole mouth, not just with the incisors. If an adult bite cannot stand up to a game of tug, then there was probably something initially wrong with the bite. We do not play vigorous games of tug with puppies because their gums can be sore during teething and we want them to enjoy the game! For puppies we just leave tug toys out, get the puppies interested and let them take the toy.

There are two elements that I focus on in selecting a Lakeland for agility. The first and by far the most important is to select a puppy that is interested in people. I like to watch the pups interact with one another and see which ones watch me or come over for my attention. All puppies do this to an extent, but some are much more interested in playing and tussling with siblings, while others will be attracted to your approach and will stop paying attention when you remain still. Once the more “Shadow peoplecentric” pups get your attention they tend to try to interact with you, ignoring the antics of their littermates. Any kind of training is much easier if you can start with a dog who intrinsically finds people more rewarding than other dogs. The second element I look for in selecting a performance dog is a clean, long, sloping shoulder. The tight turns, jumping climbing and weaving of Agility puts tremendous strains on a dog’s front assembly. The better the front end, the sounder the dog will stay over the long haul. Most of the elements that make a good dog in the conformation ring are desirable in an Agility dog, with one exception. Too firm a topline (on that is inflexible) seems associated with stiffness in the back hence interferes with tight turns.

Lakeland Terriers are blessed with some of the ideal structural features for agility. The standard calls for dogs 14.5 inches and 17 pounds producing an average height to weight ratio of 1.2 to 1. The lower the weight to height ratio the easier it is for a dog to jump. The spring of rib and narrow, oval chest make ideal features which enable a dog to turn tightly. Any body described as “strong and supple” will be well suited to athletic endeavors.

If you build a solid relationship with your terrier, ask for and reward self control, then you will have laid the foundation to be successful with your dog. Get that solid foundation, then take you Lakeland to obedience, agility or rally classes and enjoy working with your bright and highly responsive teammate.

The sky’s the limit!